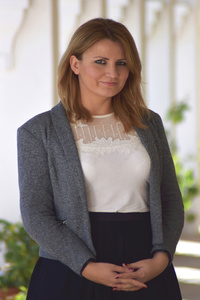 Elisa has been a working as a lawyer since 2011, and she is highly experienced in private law. Her specialization includes international, commercial, real estate and civil law, where she holds extensive experience. After completing her education abroad, she dedicated her career to national and international consultancy for private individuals and businesses, for every type of contract.

She finished her highschool education with a major in foreign languages, which led her to undertake an International Law degree at the Cattolica del Sacro Cuore University in Milan, and later, Francisco de Vitoria University in Madrid.

Throughout her academic training, she pursued an 8th month long course at Heinrich-Heine University in Düsseldorf (Germany), and 4 months at Paris-Sorbonne (Paris IV) University; she also won the Excellency Scholarship offered by the European Community in 2010, which enabled her to undertake a work placement at the Italian Consulate in Buenos Aires, Argentina.